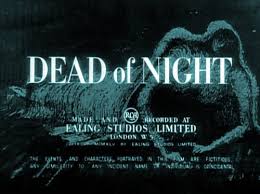 DEAD OF NIGHT is a British horror film that was released in 1945. It is what is called an anthology film with different sections of the film being directed by different directors.The film begins with the arrival of architect Walter Craig (Mervyn Johns)  at the house of Elliot Foley (Ronald Culver) for some renovations needed … END_OF_DOCUMENT_TOKEN_TO_BE_REPLACED