Skip to content
neeruahcop Uncategorized December 13, 2016 3 Minutes
Georges Simenon, was a prolific Belgian author, most famous for his fictional commissaire of Paris’ Brigade Criminelle, Jules Maigret. However, he also wrote many books which did not feature Maigret.

The Sixth Simenon Omnibus contains three novels which discuss the role that sex has in people’s lives – whether as a way of exhibiting their power over others or as a substitute for love and companionship – and the crimes that are committed there of.

In the first novel, Maigret and the Wine-Merchant, a prominent wine-merchant is shot dead shortly after exiting a house where he had been with his secretary. As Maigret investigates, he finds out that the dead man, Oscar Chabut, came from a provincial background and that he had risen to the top after putting in a lot of hard work but he also finds out that there was a most unsavoury side to his character in the sense that he couldn’t leave any woman alone. Let alone his female employees, he didn’t even spare the wives of his male employees and friends. And the worst thing was that the women came to him willingly whether to get a job, a career advancement, or for the thrill that being with such a rich man entailed. Meanwhile, Maigret gets an anonymous phone call from a man who tells Maigret that such a man like Chabut deserved to die. Maigret suspects that it might be the murderer himself who is calling him thus. But who amongst the many enemies that Chabut had had finally pulled the trigger?

First Line: “You killed her in order to steal from her, didn’t you?” 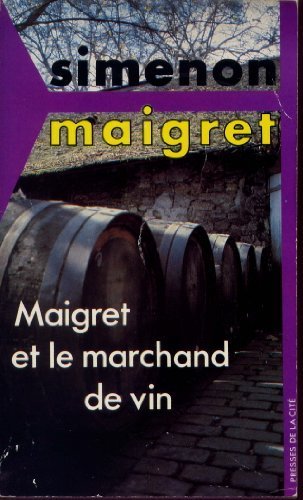 The Second novel, and the one that I found the best among the three, is The Prison. Alain Poitaud, in his early thirties and already a very successful owner and publisher of a magazine called Toi, returns home one day only to find a detective waiting for him. It seems that Alain’s wife (whom he affectionately calls Kitten) had shot her own sister Adrienne in cold blood. If this was not enough, Alain is told that she had done so in the presence of Adrienne’s two small children and had waited coolly as Adrienne died in front of her (God save us from such sisters!). The police suspect that it is a crime of passion as Adrienne had an affair with Alain (God save us from such sisters too!). But Alain informs them that his affair with Adrienne had ended a year ago (God save us from such husbands and brothers-in-law also!). However, the fact that he might not be the most desirable man in the lives of the sisters and perhaps the numerous women he has bedded puts Alain on a path of self-discovery which makes him realize that his successful, filling life is nothing but an onion, there is nothing inside when you peel off the layers.

This is a powerful novel but as I was reading it I kept on imagining such a scenario in India and visualising how different would have been the reaction over here. Alain’s parents would have cursed the fact that they got their darling son married into such a family; either the mother or father of Adrienne and Kitten would have suffered a heart attack; Adrienne’s husband would have made a murderous attack on Alain and Alaine himself would have gone and killed the man who was the lover of his wife (though this is a possibility that is discussed in the novel too). Friends, neighbours, and relatives would have descended en masse on the hapless family, some genuinely sympathetic, some only ostensibly so, but all with an opinion of their own. Finally after all the tragedy, everybody would blame Kismet or Karm and go their separate ways to talk about this incident (with embellishments) at all family gatherings.

Here there are no relatives, no nosey neighbours, and even the parents keep to the background.

First Line: How many months, how many years, does it take to turn a child into an adolescent, an adolescent into a man?

In the third novel, The Rich Man, the eponymous hero, Victor Lecoin, is the village’s big man. He has a comfortable relationship with his educated school-mistress wife but there has never been any passion in their relationship. Then one day, a new maid, Alice enters their house-hold. Alice is an orphan who has been abused by her previous employer. Lecoin finds himself getting attracted to the young waif, an attraction that ends in tragedy.

First Line. : He drew up the truck, loaded with hampers of mussels, outside the bistrot, over which the words Chez Mimile were inscribed in yellow letters.

Submitted for the Tuesday Night Bloggers @My Reader’s Block where the theme is Non-US/ Non-UK mysteries.