Design a site like this with WordPress.com
Get started
Skip to content
neeruahcop Uncategorized December 4, 2016 1 Minute
I feel that Japanese writer Keigo Higashino is one of the finest writers of mysteries. First I read
The Devotion of Suspect X and marvelled at his ingenuity. Then came Salvation of a Saint which I found to be even better than Devotion and now I have read Malice which is a fantastic mystery, a police procedural, as also a comment on the way we write and read a narrative with all our prejudices and fallings.

Best-Selling author Kunihiko Hidaka is leaving Japan for Canada with his second wife, Rie ( whom he married after his first wife died in an accident). On his last night in Japan, he is visited by his friend Osamu Nonoguchi, also a writer, albeit not as famous or successful as Hidaka himself. Before Nonuguch enters Hidaka’s house, however, he has a strange encounter with a woman who accuses Hidaka of having poisoned her cat. The two friends talk about various things before another woman, Miyako Fujio walks in. Miyako feels that Hidaka has created a character based on her brother (a former classmate of both Hidaka and Nonoguchi) and presented him in a bad light and wants to discuss the issue with Hidaka. Nonoguchi takes his leave as he has an appointment with his publisher . As his publisher goes through his manuscript, Nonoguchi receives a telephone call from Hidaka who sounds tense and wants him to come over once again to his house. Nonoguchi does so but when he reaches over there, he finds Hidaka dead. Enter Detective Kaga, who was earlier Nonoguchi’s colleague at a school where the latter still teaches. Now Detective Kaga has to find out how Hidaka was killed in a locked room but soon he finds out that why Hidaka was killed is far more important. 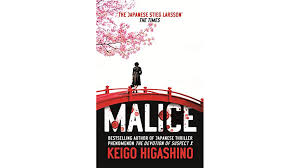 Other books read of the same author: The Devotion of Suspect X, Salvation of a Saint

Have come to know that the Tuesday Night Bloggers are looking at Foreign Mysteries this month, so am submitting this post for the meme.