Skip to content
neeruahcop Uncategorized December 30, 2015 1 Minute
The Mahabharat is not only the longest epic of this world, it is also the fifth Veda, and my all-time favourite book. This year I read three book based on it. All of them deserve a detailed review and I might do that next year but as of now, I am only summarising them in a couple of lines:

AFTER KURUKSHETRA by MAHASWETA DEVI

Three short stories that look at the aftermath of the great war.

Radheya or Karn as he is more popularly known is the tragic hero of the Mahabharat. This book did not charm me at first but thinking about it, I realised what a critical look at Mahabharat it is. Must read for all fond of Karn.

URUBHANGAM: THE SHATTERED THIGH AND OTHER PLAYS by BHASA 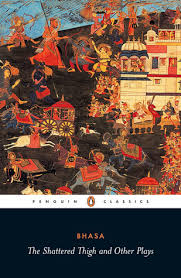 Sanskrit used to give me nightmares when I studied it in school and I was very glad when I didn’t have to study it any further. But re-reading these plays by playwright Bhasa made me regret and rue the fact that I couldn’t read them in the Sanskrit original. The title play describing the anguish of Kuru prince Duryodhan as he is unfairly defeated in that fatal mace fight is a marvel.

3 thoughts on “Books on the Mahabharat”