Skip to content
neeruahcop Uncategorized December 28, 2015 2 Minutes
Here are very brief notes on the vintage mysteries read this year but not reviewed:

AFTER THE FUNERAL by AGATHA CHRISTIE

It was a discussion on underrated Christies that led me to a re-read of this. Found it wonderful to read how skillfully Christie manipulates the reader. Must read for all Christie fans.

CROOKED HINGE and PATRICK BUTLER FOR THE DEFENCE by J.D. CARR

Since the time I read THE BURNING COURT, I have been searching desperately for a Carr that can completely knock me off my feet the way COURT did. GREEN CAPSULE, THIRD BULLET and now these two….nothing, nothing…not even close…. The search continues… Any suggestions?

DEATH IN FLAMES by GORDON ASHE

Patrick Dawlish is at the Carlion Club with his friends Neil Cousins and Andy Cunningham when a bunch of Arum lillies are delivered to him with this message: “I could not help thinking of you, Capt. Dawlish, when I saw these. So fortunate that they are not yet made into a wreath, don’t you think?’

A surprisingly good mystery that made me change my earlier opinion of writer John Creasey. Now if only the Germans had not been shown as this diabolical…

It shames me that before these books were translated into English from Urdu, I had not even heard of Safi who is one of the Subcontinent’s most prominent writers of mystery. Even Agatha Christie, it seems, had heard of him. These two are from his Imran series. Fun to read though the humour can be a little OTT at times.

THE MYSTERY OF THE GREEN BOTTLE  by SAX ROHMER


Before reading this book, I knew of Sexton Blake the way I know of Charlie Chan, Dr. Fu Munchu, Bulldog Drummond….characters heard of but never read. It is only when I read this book that I realised that Blake was the ‘Other Baker Street Detective’ living on the same street as the more famous Sherlock. This is a thrilling mystery set in the Dutch East Indies (now Indonesia). 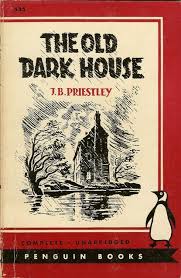 Mesmerizing mystery or a comment on human life? Human hand or supernatural agency? This book – about a handful of people trapped inside an old, dark house even as an apocryphal storm rages outside – was amongst the best reads of this year. Gifted as a prize by John @ Pretty Sinister Books. His riveting review can be read over here. Thank you so much Mr. Norris.

A mystery that could have been interesting but for a character constantly referred to as “The Girl”, “Your Girl”, “My Girl”. Totally, totally put my teeth on edge.

A group of disparate strangers find themselves stranded in a hotel in Mexico. The mystery begins well with a murder and then traces its way back to Occupied France. Reichsmarschall Hermann Göring finds a mention. But the end leaves too many loopholes. Oh yes! There is romance too.

Once upon a time, Ted Diggs had had a dog. It had died an unnatural death on the road, and he had always wanted another. In his opinion, a dog was better company than a woman. Just say, “Shut Up,”and it did. 146

Unforgettable lines from an author discovered this year. Absolutely love them:)