Skip to content
neeruahcop Uncategorized September 25, 2015 5 Minutes
There was a time when I eagerly devoured all the Perry Mason books I could lay my hands on. High school, college.. by the time I got my first job, I had read a majority of them. And then for years, I did not read anything by Gardner. This year, seeing a few reviews appearing here and there made me eager to read him once again and so when I saw this triple-decker at the library, I simply could not resist borrowing it.

To me, the pleasure of reading Perry Mason was not so much the mystery or the arguments in court as in the interaction between the characters. Initially, Mason, Della, and Drake and then later Tragg. And now going through these books again, it was interesting to see how their relationship develops.

The first one, The Case of the Sulky Girl, first published in 1933, is second in the series. And here is how the author introduces Perry Mason:

Perry Mason gave the impression of bigness; not the bigness of fat, but the bigness of strength. He was broad-shouldered and rugged-faced, and his eyes were steady and patient. Frequently those eyes changed expression, but the face never changed its expression of rugged patience. Yet there was nothing meek about the man. He was a fighter a fighter who could, perhaps patiently bide his time for delivering a knock-out blow, but who would when the time came, remorselessly deliver that blow with the force of a mental battering ram.

Della Street, his secretary, we are told, was about twenty-seven years old. Her manner radiated assurance and efficiency.

And here is my favourite of them all, Paul Drake, making his appearance:

Paul Drake, the detective, bore no resemblance whatever to the popular conception of a private detective, which was, perhaps, why he was so successful.

He was a tall man (taller than Mason we are told later), with a long neck that was thrust forward inquiringly. His eyes were protruding , and glassy, and held a perpetual expression of droll humor. Nothing ever fazed him. In his life, murders were everyday occurrences; love nests as common as automobiles, and hysterical clients merely part of an everyday routine.

While Drake drapes himself over the chair:

He sat in the big high-backed leather chair in Perry Mason’s office, and turned sideways, so that his long legs were crossed over the right hand arm of the chair. A cigarette was in his mouth, hanging pendulously at an angle from his lower lip.

Or perches on Mason’s table:

Paul Drake perched on the edge of Perry Mason’s desk and shook tobacco from a cloth sack into a brown paper which he held expertly between cigarette-stained fingers.

Mason has the habit of hooking his thumbs in the armholes of his vest… (How does one do that?)

The relationship is still at the initial stage, so here is Drake to Mason:

“All right,” he said, “I get the sketch. I just wanted to be certain there wasn’t any misunderstanding between us. Misunderstandings in my business make for dissatisfied clients, and I want to keep my clients satisfied,”

“All right,” Mason told him. “We understand each other on that.”

There was a knock at the door, and Della Street glanced significantly at Perry Mason (wondering whether to reveal things in front of Drake)

We jump seven years and 13 books for the second book: The Case of the Baited Hook, first published in 1940 and one which has a most interesting opening. 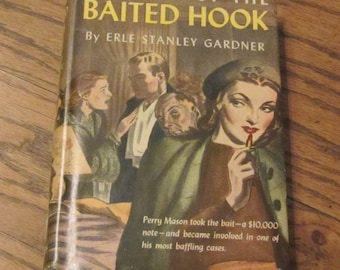 Paul Drake was tall and languid. He spoke with a drawl, walked with a long, slow-paced stride. He was thinner than Mason, seldom stood erect, but had a habit of slouching against a desk, a filing cabinet, or slumping to a languid seat on the arm of a chair. He gave the impression of having but little energy to waste and wishing to conserve that which he had.

And his relationship with Della has progressed much form the point when she was wary of divulging details in front of him to the point where they flirt with each other:

Paul Drake’s voice from the corridor said, cheerfully, ” Against the light, your legs are swell Della. They’d get by in front of any window.”

“Sometime when you’re not too busy, tell Perry all about them, will you, Paul?”

Drake, in a rare good humor, circled Della Street and edged in at the open door….

“If Paul’s through admiring my figure, I’ll be going” Della observed.

“What the devil was the last crack about?” Mason asked.

Drake grinned, “Don’t you ever notice your secretary’s legs?”

Mason, of course, has to play the party pooper:

Drake’s loquacious good humor evaporated under the influence of the lawyer’s savage grimness.

There is also an interesting encounter between Mason and Sergeant Holcomb who are usually at loggerheads:

Sergeant Holcomb spun on his heel, took two quick steps…pushed a hand out at the surprised lawyer.
“All right, Mason, “he said, “I don’t like your methods. Some day I’m going to throw you in the can, but I do appreciate good detective work when I see it and I’m enough of a cop to pull for a guy who solves crimes, even if I don’t like the way he goes about it.”
Surprised, Mason shook hands.
“My thanks for handing me a tip on a silver platter and for bringing a murderer to justice. Any cop worth his salt will respect a man who can do that.”
Mason clapped Sergeant Holcomb on the shoulder, “Spoken like a man, Sergeant. Go to it.”
When Della admonishes him for helping Holcomb, Mason has rare words of praise for the sergeant: “…he’s a fighter and I like fighters.”
However, these words do not apparently help Holcomb because in the very next book of the series: The Case of the Silent Partner, published in that very same year: 1940, he has been replaced:
Lieutenant Tragg said nothing but concentrated on driving in traffic. He was about Mason’s age. His features stood out in sharply etched lines. His forehead was high, his eyes keen and thoughtful, an entirely different type from Sergeant Holcomb. Mason, studying the profile as the car screamed through the streets, realized that this man could be a very dangerous antagonist indeed…the man was as cool and detached as a surgeon performing a delicate operation. His face showed complete concentration and an entire lack of nervousness.

What are the books about? Oh, they are about a heiress who is not on good terms with her guardian who ends up dying; about a masked woman who is Mason’s client but Mason has no clue about who she might be; and a young woman who runs a flower-shop she is in danger of losing. Interesting mysteries but not as interesting as the characters.

First Line: The girl walked past the secretary who held the door open, and surveyed the law office with eyes that showed just a trace of panic.

First Line: two persons in the city had the number of perry mason’s private, unlisted telephone. FL: Mildreth Faulkner, seated at her desk in the glass-enclosed office of the Faulkner Flower Shops, selected a blue crayon of exactly the right shade.

Source: HML
Other books read of the same author: (Among Others): The Case of the Spurious Spinster

Entry for Friday’s Forgotten Books @ Pattinase. Please head over there for the other entries.