Skip to content
neeruahcop Uncategorized April 28, 2015 2 Minutes
This month I have read more non-fiction than fiction. As three of these books deal with Indian revolutionary Bhagat Singh, I thought I’d club them together.

Rajshekhar Vyas is a noted writer who has written considerably about the revolutionary stream of our freedom struggle. This book deals with the thoughts of Bhagat Singh and also contains a translated version of Irish revolutionary Dan Breen’s autobiography – My Struggle for Irish Freedom – a book which had a deep impact on Singh and his comrades. 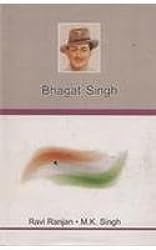 This book again deals with Bhagat Singh and his thoughts. The authors’ note does not mention that this is a compilation of essays on Singh published at various times but the way the book is repetitive makes me suspect this is the case. Typos and certain factual inaccuracies are further irritants.

First Line: Bhagat Singh was an Indian freedom fighter, considered to be one of the most famous revolutionaries of the Indian independence movement.
Publication Details: ND: K.K. Publications, 2009
First Published: 2009
Pages: 249
Source: DPL

Lala Ram Saran Das was an older contemporary of Bhagat Singh who had already suffered incarceration at the infamous Cellular Jail in the Andamans when he met Bhagat Singh, Sukhdev and others of their circle. Arrested once again in 1929 and tried along with Bhagat Singh, he asked the latter to write an introduction to his verse-composition Dreamland. For years while Singh’s introduction to the text was available, the main text itself seemed to have disappeared. But now one can not only read the text but also Das’ preface which he wrote after India had become free and Bhagat Singh a memory. The preface which answers many of the questions raised by Singh in his introduction is interesting but what I found most touching was this line that Das made in his statement to the police: ” After this I went to Amritsar and happened to see Sukhdev near the railway station.”

I don’t know why I was moved by this but perhaps just the thought that here were men who had met and talked with these young men, had accidentally chanced upon them….I don’t know.

First Line: Lala Ram Saran Das Talwar was born at Kapurthala, on 24th August, 1888 in a middle class Kshatriya family, who devoted his heart and soul into the Freedom movement of India.

6 thoughts on “Books on Bhagat Singh”