Skip to content
neeruahcop Uncategorized December 27, 2014 4 Minutes
With time at a premium – just where did this year DISAPPEAR? – I am writing short reviews of golden age mysteries read this year.

Arthur Morrison (1863-1945) was an English novelist and journalist. The Hole in the Wall is an interesting crime novel, narrated in part by a child Stephen who goes to live with his grandfather after the death of his mother and infant brother. Grandfather Nat runs a drinking pub in the east end of London near the waterfront. Much of the novel’s strength lies in the bewilderment of the child who narrates the goings-on that he cannot understand but the reader can. The portrayal of the seedier side of London at the turn of the century is also compelling in this tale of fraud, theft, and murder.

The Creator of Winnie the Pooh, A.A. Milne, wrote this mystery (in fact, the only mystery that he wrote), in order to show his love and regard for his father who loved who-dunn-its.

Mark Ablett, a member of the landed gentry (in that long-lost golden age of Britain), is entertaining guests at his house when a letter arrives from his estranged brother, Robert, who being the black sheep of the family had long ago being bundled-off to Australia (which seemed a preferred destination for all such black sheep). Mark is disturbed on receiving the letter and when the brother arrives, voices from the study indicate that the reunion is not going too well. Soon a gun-shot is heard from the locked room and when the door is forced open, Robert lies dead in it while there is no sign of Mark. Tony Gillingham, a stranger to these parts, arrives at this very moment to meet his friend Bill Beverley, who is one of the guests of Mark. Gillingham plays Holmes to Beverley’s Watson and solves the case. 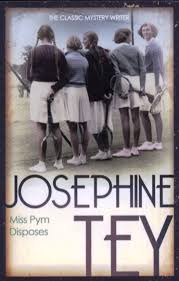 Written by Scottish writer, Josephine Tey, Miss Pym Disposes, is an interesting text, in as much as it expounds the dangers of taking circumstantial evidence as the only criteria for fixing guilt. It also interrogates the prejudices and fixed opinions of the detective investigating a case.

Lucy Pym is saved from the drudgery of teaching French to school girls by a legacy left by an aunt which enables her to study psychology, later becoming an author of a best-seller. As she is a minor celebrity in her field, she is invited to lecture by her friend Henrietta Hodge, who is in-charge of Leys, a physical-training college. Though she intends to deliver the lecture and leave, Lucy finds herself getting involved in the lives of the girls. She forms her own opinions about them and when murder happens, she solves the case and apprehends the culprit. But is she right? Or has her own prejudice, made her wear blinkers?

The toughest category for me in Bev’s Vintage mystery challenge (returning in 2015) was ‘crime other than murder’. All the books that I read had murder in them. So, I went back to an old-favourite: Enid Blyton. The last book in Blyton’s Secret Series sees the children (Peggy, Jack, the twins, and Prince Paul) living in a castle. Paul’s family is coming from Bohemia and this is a sort of a trial-run to see whether the royals would be comfortable in the castle. Right from the beginning, there is something odd about the castle: Musical instruments start playing by themselves, furniture gets rearranged, books fall off the shelves, eyes of portraits start gleaming…. Is the castle haunted as local legend has it or is something sinister going on?

As I had picked up Blyton after a very long time, I wondered if I’d still like her, especially as there has been a lot of talk of her books being racist. Yes, Britannia rules the waves in her books but she definitely knows how to keep one engrossed. And the description of scones and ginger ale and pies and cakes was as tempting as it was when I first read this book as a kid and longed for such adventures in my life too.

Charles Eric Maine is the pseudonym of David Mcllwain (1921-1981), a writer of thrillers which combined elements of Sci-fi (or vice-versa). On the island of Kaluiki, a scientific hush-hush experiment is underway. As the project reaches it final stages, barring eight people, the rest all leave the island. As the reactor warms up, a death occurs. Even as the (now seven) scientists try to come to grips with this, another death occurs, and it dawns on them that one amongst them is a killer. Will the experiment be conducted successfully or will the remaining be dead before that, killed by the murderer…or something much more insidious. With echoes of Christie’s And There Were None, this is an interesting tale of terror in a cloistered community but the end proves that Maine is no Christie.

First Line: My grandfather was a publican – and a sinner, as you will see.

First Line: In the drowsy heat of the summer afternoon the Red House was taking its siesta.

First Line: Two girls were standing at their front gate one sunny afternoon in July.

First Line: the long count-down began at prcisely twelve noon on January 18th, and from that instant strict radio silence was observed.