Skip to content
neeruahcop Uncategorized September 2, 2014 3 Minutes
An arm clad in black with lace at the cuffs ending in a wrinkled beringed hand is shown petting a cat even as a disembodied voice speaks to the cat, Bequer, as you’d to a child. The credits roll on even as the wrinkled hands knit expertly… but suddenly a heart attack. Bequer mews in terror.

A struggling actor, Ophelia (Claudia Islas)  reaches home after a shoot only to find an unknown girl sleeping in her bed. Turns out the girl is Marta (Lucía Méndez – who reminded me of a young Aishwarya Rai) , a model, and cousin to Aurora (Susana Dosamantes), one of Ophelia’s two flat-mates The other being Pilar (Helena Rojo) , a divorcee, called jokingly a vampire by Ophelia since she lives on the money given to her by her ex-husband. Marta too has been let-down by a man since her boyfriend turned out to be a married man with a daughter to boot. Now Marta has nowhere to go and thus moves in with the other girls after agreeing to share in the rent and other house-hold expenses.

Meanwhile, Ophelia is informed by a lawyer that her aunt Susana is dead and has willed her house to her. Ophelia is skeptical: she had not parted with her aunt on very good terms and people do not bequeath their possessions just like that. She is sure there is a catch somewhere. The lawyer assures her there is no condition attached except for one – and that too is a request – that she take care of Bequer, the cat. Aurora (who has accompanied Ophelia to the lawyer’s chamber) is disgusted – it is clear she is no cat-lover but Ophelia has no problems.
The four excited girls make their way to the old mansion only to be (non) greeted by Sophia (Alicia Palacios), their aunt’s maid – who would give Mrs.Danvers a run for her money. Stone-faced Sophia shows the girls around -all of them chattering like magpies. To them, the artifacts round the house are nothing but junk – Sophia comments acidly that modern tastes are horrendous. She takes them to the aunt’s bedroom and Ophelia declares that she will keep the room locked in memory of her aunt but Pilar scoffs at this sentimentality and declares that she has no qualms in sleeping in the room and on the bed (on which the dying woman was laid). However, a few hours later she regrets this foolhardiness as she wakes up to find the rocking chair in the room – rocking. She screams and everybody comes running but it is only Bequer (Blacker than the night – as Sophia sepulchrally declares) who has come home after its wanderings. Pilar declares she is sleeping in the room no longer.
The girls settle down though they feel that Sophia grudges them being over there and that Bequer is nothing but a nuisance. One fine day, Ophelia returns home with her fiance Pedro (Julián Pastor) , only to find Sophia calling for Bequer. On inquiring, she is told that the cat has been very naughty that day having gobbled up Aurora’s canary. From that day, Bequer disappears and its body is discovered four days later in the cellar. It apparently died of hunger. That night, Aurora is awakened from her sleep by the sound of someone crying. The others do not hear anything except for Sophia who declare that the old lady has come back to haunt them.

They scoff at her but soon enough terror is unleashed. How many of them will survive the darkness of the night? 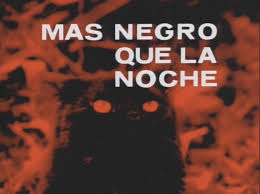 If you like horror without blood, gore, or grossness, you will like this movie. Directed by Carlos Enrique Taboada,  this Mexican film was released in 1975 and is today’s entry for Tuesday’s Overlooked Films and/ or Other A/V @ Sweet Freedom.

SPOILER:
Though, of course, one should not look for too much of reasoning in a horror movie, I wonder why the old lady’s ghost did not stop the girls while they were carrying out their heinous act?