An old man, Leopold Kroner (Fritz Leiber, Sr.- father of SF writer Fritz Leiber) walks out of jail where he had spent five years on charges of embezzlement. He is greeted by his daughter Martha (a teary-eyed Maria Palmer) but is surprised that a certain Mr.Colby is not there. The old man’s surprise (and anguish) is all the more surprising when one comes to know that he had been imprisoned because he had been selling counterfeit bonds from Colby Enterprises and had been implicated because the Boss, Andrew Colby (Vincent Price – with a voice to die for – and the same guy whom Kroner had wanted to be part of the welcoming committee) had testified against him.

Meanwhile, an attorney Robert Regan (Edmond O’Brien) barges into Colby’s office despite the protestations of his secretary Noel Faraday (Ella Raines in Girl Friday mould). Regan wants Colby to pay $68.75 which he owes to his client – a pushcart dealer- as damages. Colby is impressed by the attorney’s tenacity and hires him as his bodyguard as he fears that Kroner might be planning to harm him. Regan agrees to the job and that very night even as he is talking to Faraday, a shot is heard from Colby’s study. Regan rushes up to find Kroner brandishing a gun though Regan himself had locked all the doors of the house. Kroner turns towards Regan and the latter shoots him dead. At the inquest, he is acquitted as the killing was done in self-defence. However, Regan’s friend Lt. Damico (a studious looking William Bendix) smells something fishy. Already troubled by killing a man, Regan returns home only to find himself cornered by a distraught Martha who wants to know what kind of man can kill another so that he can buy another car. Regan now starts feeling that he has been used as a tool by Colby.

He springs a trap for Colby but who will be the one to be caught in the web? 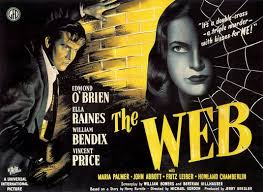 The film begins well with a car eye’s view of Manhattan but fails to live to its promise. The most interesting part of the movie for me was the relationship between Colby and Faraday. She is his right-hand and finds herself on the horns of dilemma what with her growing attraction for Regan and her own suspicions and misgivings regarding Colby vis a vis her loyalty towards him. Colby too cannot bear her turning disloyal and there is a telling moment when he wants her to reveal the truth to him. It is the moment when he is most human.

Based on a story by Harry Kurnitz and directed by Michael Gordon, this movie was released in 1947 and is today’s entry for Tuesday’s Overlooked Films and/ or Other A/V at Sweet Freedom.