Skip to content
neeruahcop Uncategorized March 28, 2014 3 Minutes
It’s strange that soon after going through Margot’s post on novels with a compressed time span, I should find myself reading a book which spans just two days with the main action taking place one night when things simply spiral out of control, changing lives forever.

William Somerset Maugham’s Up at the Villa begins with a description of almost unbearable loveliness: The villa stood on the top of a hill. From the terrace in front of it you had a magnificent view of Florence; behind was an old garden, with few flowers, but with fine trees, hedges of cut box, grass walks and an artificial grotto in which water cascaded with a cool, silvery sound from a cornucopia.

Who wouldn’t want to stay in such a place, especially if you could lounge about the garden and read books? Mary Panton, a young widow, is staying in the villa, recuperating from the physical and emotional trauma endured during years of marriage to an alcoholic, wastrel, wife-beater, womaniser of a husband whom she could not leave because of his emotional dependence on her. His death in an accident frees them both and her lawyer sagely advises her to marry next time for position and companionship. At that time Mary had found the advice absurd having no desire to get married again but now having received a proposal from Sir Edgar Swift, she wonders whether she should say yes to a life that would offer her security and comfort. Edgar – years older than her and actually a contemporary of her father in the Indian Civil Services – has cared for her right from the time she was in her teens. And now he has been offered the governorship of Bengal and he wants to get married to her before taking up his new position in India. Touched by his long devotion to her and thrilled about being the wife of a man in such an important position, Mary is yet in something of a fix and asks for a couple of days to think it over. That night, even as Edgar leaves town for an important meeting, Mary goes to a party where there a few other English expatriates. Amongst them is Rowley Flint, known as something of a scoundrel with a bad record of loving girls and ditching them. He had been paying a great deal of attention to Mary but even she is shocked when he proposes marriage to her. Two proposals in one day! Mary who thinks Flint is simply being odious, sobs out the story of her wretched married life and makes up her mind to marry Edgar.

On her way back, she runs into a young man who had been playing violin at the restaurant they had dined in. He is a wretched player yet Mary had given him a hundred lire note in a burst of generosity. Now seeing him standing forlorn, hungry, and tired, and being in an overwrought condition herself, she takes him to the villa and quite before knowing it she finds herself cooking for him, waltzing with him, and finding herself in bed with him. Karl (that’s the name of the violinist) tells her that he is the son of an Austrian policeman who shot himself when the Nazis marched into Austria. He himself rebelled against their rule and was put into a concentration camp from where he escaped later and made his way to Italy where he barely manages to scrap along. Sometimes, he says, he wants to end it all the way his father did. Full of pity for the young man and yet desirous of seeing him leave before dawn breaks, Mary offers him money. 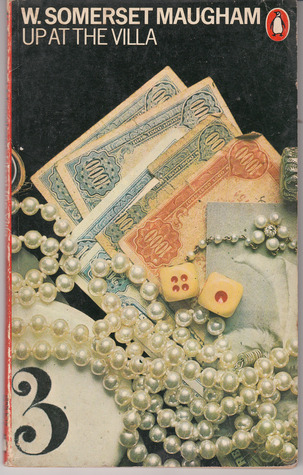 It is absolutely the worst thing she could have done and soon enough there is blood spilled and the villa changes from a place of sanctuary to a haunted place of dark deeds.

Up at the Villa raises a lot of uncomfortable questions. How far should one play with the emotions of another human in order to exalt your sense of the self? The English expatriates, living in a blissful paradise, seem unconcerned about the happenings of the world as it slowly falls to pieces. (The book was first published in 1941 and depicts the period just before the second world war). The dismissal of Karl by the characters and the narrative seems ominously like what happens to little people in all grand narratives. More than the Empire-builder Edgar Swift, the stiff-upper lip Mary, and the lovable scoundrel (as only the British can be) Rowley Flint, it was the marginalised figure of the Austrian refugee who really made an impression on me.

This book had long been on my wishlist and I found it unputdownable, finishing it virtually in one sitting.

First Line: The villa stood on the top of a hill.

Other books read of the same author: Cakes and Ale, The Magician, The Painted Veil, The Razor’s Edge, and Numerous short stories.

20 thoughts on “Forgotten Books: Up at the Villa by Somerset Maugham.”