Skip to content
neeruahcop Uncategorized February 16, 2013 4 Minutes
I had heard of Rex Stout but had not realised how popular Nero Wolfe was before I started blogging. Last year then I read my first Wolfe: The Mother Hunt. I loved Archie’s narrative skills but wasn’t too enamoured of Wolfe’s detection or the plot. Fellow mystery enthusiast, Rishi Arora @ Classic Mystery Hunt, then suggested that I read Some Buried Caesar. 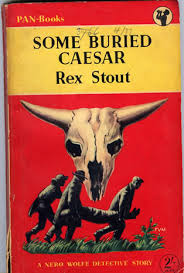 Some Buried Caesar begins on a sunny September day. A day full of surprises. The car which is being driven by Archie and carrying Wolfe and his precious orchids, rams into a tree. Archie insists that the car burst a tyre while Wolfe is happy because the accident proves his theory that vehicles have a will of their own, that their apparent submission to control is illusory and that they may at their pleasure, and sooner or later will, act on whim (3)

Wolfe and Archie then walk towards a farmhouse to ask for help. As they enter, Archie sees a man waving a shotgun at them. Before they can really understand what the man is trying to do, a huge bull is upon them. What follows is a surreal scene that has a raging bull, a-running-for-his (and Wolfe’s)-life- Archie, a fence, a blob of red, a spectacular jump, some applause, and a still-as-statue Wolfe atop a rock.

The upshot of this incident is that Wolfe and Archie find themselves in the house of Tom Pratt who owns the bull and who later invites them to a barbecue in which the bull’s meat will be served. But the bull is no ordinary bull, it is Hickory Caesar Grindon, a Guernsey, a grandson of Burleigh’s Audacious, has taken nine grands, has fifty one A R daughters, and Nine A R sons. His daughters too have done him proud, twelve of them having topped 13,000 pounds of milk and 700 pounds of butter fat.

No wonder with such accomplishments and lineage, the National Guernsey League is hoping mad at the idea of the master-champion being fed as dead meat. Also mad at Pratt are the Osgoods, a neighbouring family which considers itself the uncrowned kings of the place and Pratt as nothing but an upstart. The young scion, Clyde Osgood challenges Pratt that he wouldn’t be able to make a beef steak of Caesar and bets $10,000 on it. Pratt accepts the challenge and asks Wolfe to stay on and help him guard his prized bull. That night, even as Archie, guards the pasture with the bull in it, and has another guest of Pratt’s, Lily Rowan, for company, Clyde Osgood is gored to death by Caesar.

Only his father insists that his son was murdered and enlists Wolfe’s help in nabbing the killer.

The novel first appeared in abridged form in The American Magazine (December 1938), under the title “The Red Bull.” It was first published in book form, under the title Some Buried Caesar by Farrar & Rinehart in 1939 and is the sixth book in the Nero Wolfe series.

It was again published as The Red Bull as a Dell Mapback in 1945, and featured a scene-of-the crime map by Gerald Gregg on the back-cover.

The wiki-entry also informs me that Lily Rowan – who has a tendency to peel Archie like a mango and ask for a kiss every two sentences – and who goes on to become the love-interest of Archie appears for the first time in this novel.

Lily Rowan sat on the grass holding her nose. I had a notion to stop and tell her with a sneer that it was only a pose to show how sensitive and feminine she was…

Lily held her hands out. “Help me up.”

I grabbed hold, gave a healthy jerk, and she popped up and landed flat against me; and I enclosed her with both arms and planted a through one with medium duration, on her mouth, and let her go.

“Don’t count on that as a precedent,” I warned her. “I’m overwrought. I may never feel like that again. I’m sore as the devil and had to relieve the tension somehow. May I use your telephone? Mr. Pratt’s telephone.”

“Go climb a tree,” she said, and got her arms through mine, and we went to the house that way, though it is a form of intimacy I don’t care for, since I have a tendency to fight shy of bonds. Nor did I respond to the melting quality that seemed to be creeping into her tone, but kept strictly to persiflage. (92).

The title which I always thought was a little awkwardly constructed is actually from Omar Khayyam’s Rubaiyat:

I sometimes think that never grows so red the rose as where some buried Caesar bled.

I guess that just this one line makes the book worth a read. 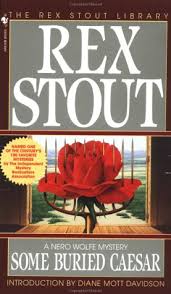 First Line: THAT sunny September day was full of surprises.

Trivia: Mystery book sellers voted the book as one of the top 100 favorite mystery books of the 20th century

Other books read of the same author: The Mother Hunt

The book can be purchased easily. I borrowed it from the H.M. Library [F.S.B 57B]

*
Submitted for the Vintage Mystery Challenge: Somebody Else’s Crime (Rishi’s review of the book for last year’s challenge can be read over here.)

10 thoughts on “Forgotten Books: Some Buried Caesar by Rex Stout”