Skip to content
neeruahcop Uncategorized January 21, 2013 3 Minutes
Anthony Gilbert was one of the finds of last year. It is thus appropriate that the first mystery read this year be of hers. Anthony Gilbert was the pseudonym of  Lucy Beatrice Malleson and she was born almost at the fag end of the 19th century, in 1899. Her first published novel was The Man who was London in 1925 under the name of J. Kilmeny Keith. As Anthony Gilbert, her first published work was The Tragedy at Freyne (1927). Her protagonist was Scot Egerton, who went on to solve crimes in 10 more novels. But in 1936, appeared Arthur Crook, a lawyer with a penchant for wearing loud clothes and quite unlike the aristocrat detectives of those days. Murder by Experts (1936) was so well-liked that he appeared in 50 more books. 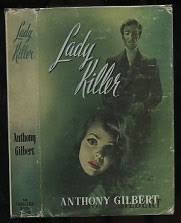 Lady-Killer is the 25th book of Crook’s. Unlike the other two that I have read of Gilbert’s, Lady-Killer is more in the mould of a thriller than a mystery. We know right from the beginning who the criminal is, the question is whether Crook will be able to apprehend the man before he is able to do another dastardly deed.

Henry’s vocation is being a husband. Like the famous English king with whom he shares his first name, Henry  first woos, then weds, and then kills his wives (after taking away their property, of course). Unknown to him though is the fact that a London lawyer Arthur Crook has taken note of the fact that many women whose husbands have the initial H. G. have died in unfortunate circumstances.

And then Henry falls in love with an orphan Sarah. She is impish, energetic, and liable to act without thinking of the consequences. Henry takes her to a lonely cottage and initially she is just happy to have Henry but slowly uncomfortable questions rise in her mind. But cut off as she is from the rest of the world, would any help reach her before Henry decides that she has become a little too inquisitive for her own good?

This being a post WW II novel, it was interesting to see how the position of women had changed as regards their venturing out and taking up jobs. Here is Sarah describing her job at a firm:

“An architects firm and as dull as ditchwater….When I first went into an office about five years ago my aunt…warned me to be careful about men, all in capitals, if you know what I mean. Some of these scaremongers should work in offices themselves. They’d soon lose some of their illusions. They get their ideas from the magazines or the lending libraries, where the employer’s middle name is always wolf, and he’s always dying to seduce the latest recruit. Mr. Rimington is the dullest of bachelors and his partner about as exciting as a pudding when the water’s got in. …If you want to ensure your daughter or niece achieving a blameless old age, put her into an office.” (67-68).

On a more bleak side, there are many orphans or people left without family members. Gilbert, in fact, mentions Germans being killed in British air-raids:

All in all, this was a good thriller with the tension becoming unbearable at times.However, I did miss the knock-out punch in the end that a Gilbert mystery has.

First Line: IN THE SUMMER OF 1948 a young woman called Greta Mannheim, who was employed as a housekeeper by a Mrs. Derry, of London, S.W. 7 went for a fortnight’s holiday, ostensibly to Torquay, and did not return.

Other books read of the same author: The Clock in the Hatbox, Death Knocks Three Times

The book might be available in libraries or second-hand book shops. I borrowed it from a library [F.G.A 17A]