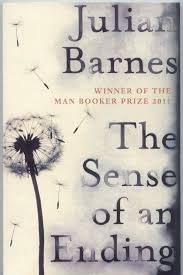 But first the facts. The book is narrated by a middle-aged Tony Webster. Retired, on good-terms with his ex-wife, responsible father of a daughter, Tony is at peace with himself in the sunset of his life. However, a lawyer’s letter arrives to ruin that equanimity. Sarah Ford, it seems, has left him with 500 pounds, a letter. and a diary. But who is Sarah Ford? It turns out that she is (or rather was) the mother of Veronica, a girl Tony was seeing in his younger days. He had spent one weekend with Veronica’s family, and that was the only interaction he had with the latter’s mother Sarah. Subsequently, Veronica and Tony had fallen apart and the former had become involved with Adrian, one of Tony’s friends.

So why had Sarah left him this money? Her letter explains little. And the diary, which is of Adrian, never reaches him as Veronica refuses to part with it. Intrigued by all this, Tony contacts Veronica to get hold of the diary. And finds himself trapped in a labyrinth of unanswered questions.

Barnes’ novel is not a mystery in the conventional sense. There is no unravelling of secrets at the end of it. There is just the sense of what a character terms as a ‘fucking waste’ and an awareness that human relationships cannot be scaled down to some mathematical equation.

A poetic, powerful book that will stay with you for a long time. Recommended.

Opening Lines: I remember in no particular order:

– a shiny inner wrist;
– steam rising from a wet sink as a hot frying pan is laughingly tossed into it;
– gouts of sperm circling a plughole, before being sluiced down the full length of a tall louse;
– a river rushing nonsensically upstream; its wave and wash lit by half a dozen chasing torchbeams;
– another river, broad and grey, the direction of its flow disguised by a stiff wind exciting the surface;
– bathwater long gone cold behind a locked door.

This last isn’t something I actually saw, but what you end up remembering isn’t always the same as what you have witnessed.

Title: The Sense of an Ending

The rest of the post contains SPOILERS, so please do not read unless you have read the book.

To me it did seem as though, Veronica had kept Tony’s vitriolic letter because she has cursed Adrian and Sarah in much the same manner, right down to the child. And now feels guilty about her own role in cursing the child. How far, as Adrian’s letter says, does responsibility extend?

Submitted for the following challenges: AZRC, Back to the Classics, British Books, New Authors, Wishlist

7 thoughts on “Review: Julian Barnes’ The Sense of an Ending”