My entry into the bewildering world of Franz Kafka was through The Trial. The book with its story of a man persecuted for a crime he has no inkling of whatsoever was terrifying and apt as an analogy for life. For years, I dreaded picking up a Kafka again lest another facet of this impersonal universe where often we are nothing more than cogs caught in a wheel haunt me again. This year, however, I was determined to read America which had been lying on my shelves for more than a decade.

A much easier read than The Trial, America (Der Verschollene) is the story of a teenager, Karl Rossmann, who arrives in America after being seduced by a maid who subsequently becomes pregnant. While disembarking from the ship, Karl realises that he has forgotten his umbrella behind.The symbolism is adequate. No longer does Karl have the shelter of the Old World. As he goes back to retrieve it, he gets waylaid by the Stroker who tells Karl that he has been laid off because he dared to complain against the foreman. Touched by the man’s plight, Karl argues his case in front of the captain. His defence impresses a Senator who is standing next to the captain, and who turns out to be the long-lost maternal uncle of Karl who had migrated to the States decades ago and who has now built himself a considerable fortune. The uncle who has anglicised his name from Jacob Bendelmayer to Edward Jacob, takes his nephew under his wings going as far as to provide riding and music lessons for him. One day, however, Karl accepts an invitation by his uncle’s friend to the latter’s house and this so offends his uncle that he turns him out. Adrift once again, Karl sets out on his own and has a number of adventures including falling in the company of rogues, working as a lift-boy, working in a theatre etc.

America was the first novel that Kafka wrote. Having been abandoned, it remained incomplete at the time of his death, in his forty-first year, of tb. The book has a surreal, bewildering quality to it and we are never very sure of where we stand. [It smites us right at the beginning when the Statue of Liberty is described as carrying a sword in its arm]. The ground can sink anytime underneath us. Reliability is a foreign concept and people behave in the most bizarre manner. We can never be sure of anyone or anything. 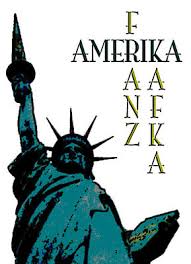 If you haven’t read Kafka, this book provides an easy entry point. It holds one’s interest but it doesn’t have the haunting quality of The Trial.

First Line: As Karl Rossman, a poor boy of sixteen who had been packed off to America by his parents because a servant girl had seduced him and got herself with child by him, stood on the liner slowly entering the harbour of New York, a sudden burst of sunshine seemed to illumine the Statue of Liberty, so that he saw it in a new light, although he had sighted it long before.

Other books read of the same author: The Trial

The book can be easily purchased on the Net. I bought my copy at a library sale.

Read as part of the German Literature Month

6 thoughts on “The Man who Disappeared: Franz Kafka’s America”