Skip to content
neeruahcop Uncategorized July 22, 2012 2 Minutes
Listening there, in tense expectation of the first sudden shot which would tell that the opposing forces had made contact, Ledbury felt a quickening of the pulses. Ridiculous, perhaps, for this was merely an exercise, a mock-battle, in which imagination ruled and much had to be taken for granted. But, after all, it was a rehearsal for the real thing, and how men acquitted themselves when the real thing came would depend largely upon the experience they had gained in exercises such as these.

John Rhode’s Night Exercise begins with a bang. The year is 1942. For years now, Britain, has been on the edge, waiting for the day when Nazi paratroopers would drop from the skies to invade the fields of England. On a day in September, Major Ledbury, the commanding officer of the Wealdhurst Home Guard, organises an exercise, to test their mettle. Along with the Civil Defence Services, the guards have to defend their town against regular troops masquerading as German soldiers under the command of Major Everton. Two other officers along with Ledbury himself are to act as umpires, impartially observing the entire exercise.

One of the umpires happens to be Colonel Hector Chalgrove, a man who delights in being rude and offensive. Right from his entry, he succeeds in raising everybody’s heckles. And by the end of the exercise he disappears. Did he disappear voluntarily or is there a more sinister reason for his non-appearance? There were many out there in the night who would have loved to see him dead. His nephew, Ronald Chalgrove, who stands to inherit a considerable fortune. Major Everton, who felt that Chalgrove was carrying on with his wife. Stephen Dalton, a man who had been dismissed from service by Chalgrove. Captain Gayner, to whom Chalgrove was a little too condescending. Colonel Brigstock whose alibi is perfect…too perfect, in fact. Or Major Ledbury who commented that, “If someone digs a bayonet into that chap’s ribs in the heat of battle, I shan’t break my heart over it.”

The novel not only brings out the tensions between men already on the razor’s edge but also discusses the questions as to what may happen when the commanding officer himself comes under suspicion. Major Ledbury, being the prime suspect finds himself being cut-out by the people of the small town and wonders whether they would ever be able to obey his commands.

The novel is interesting in the beginning but slowly loses steam. If Chalgrove is detestable, I wasn’t enamoured by Ledbury either who dismisses all those who cannot contribute constructively to the war-efforts as ‘useless mouths’:

“Useless mouths!” Fordaway exclaimed. “What do you mean by that, exactly?”

“It’s not an expression that needs much definition, I should have thought. by useless mouths I mean people who consume and drink without performing any service to the community in return. Invalids, old people past work, children under fourteen, and so forth.”

I have since discovered that John Rhode was the pseudonym of military officer Cecil John Street who wrote a number of books. This book was not very interesting but I’d like to read more of his works.

First Line: THE HEADQUARTERS of the Wealdhurst Company of the Home Guard was established in a small unoccupied house in the centre of the main street of the little town.

The book might be available in libraries. I borrowed it from a library myself.

Submitted for the British Books Challenge 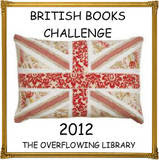