Skip to content
neeruahcop Uncategorized July 2, 2012 2 Minutes
I guess in the final analysis, millions of us follow him Charlie Brown …millions of us cheer him on…because his many struggles represent so many of our individual struggles.

To me, Brown is the most challanging colour in Bev’s Color-Coded Challenge, mainly because of my apathy to the three titles that immediately spring to mind:

Of these, I’ve read the first one. I found it to be okay but not a Christie that I would like to re-read.

A few years ago I picked up The Complete Father Brown and while I enjoyed the stories initially, by the third collected work, Father Brown started getting on my nerves. I am not keen to read the stories.

I have a copy of the third but just one look at the tiny type-set is enough to give me the jitters.

All this rambling is because finally I found a lovely little book that has brown in its title. Lee Mendelson’s Charlie Brown and Charlie Schulz is a delightful book about the creator of Peanuts. Starting from the time when Charlie Schulz (or Sparky as he was lovingly nick-named) jumps two classes because of his academic acumen and then finds himself a misfit in a class that has other students towering over him, the book chronicles the initial failure and frustration and the eventual triumph of Schultz and his alter ego. Illustrated with the most memorable Peanuts adventures, the book also has some of the earliest comic-strips (or Funnies, as I discovered, they are called in the States) of US. It was fun to go through  the German dialect of the Katzenjammer Kids or social aspirations of Maggie in Bringing Up Father. (Incidentally, I had no idea that Bringing Up Father belonged to this early period). But what I found most funny was the news that an Italian Communist Party Newspaper, Unita, found the Peanuts to be Fascists who are either stupid or have suicide complexes!!


The book also has a write-up by Schulz where he talks about his love for the comic-strip:


Many times people come up to me and tell me how much they appreciate the philosophy of Peanuts. This never fails to confuse me, for I really do not know what this philosophy is. It has always seemed to me that the strip has a rather bitter feeling to it, and it certainly deals in defeat. It has given me the opportunity to express many of my own thoughts about life and people. It is my own opinion that it is absolutely necessary fro each one of us to strive to gain emotional maturity. Unless a person becomes mature in all things, he will always have fears and anxieties plaguing him. It is interesting to put these adult fears and anxieties into the converstions of the children in Peanuts. (252)


If you are feeling low just read the book. The antics of Charlie Brown and his gang (Snoopy, Lucy, Linus, Schroeder, Peppermint Patty, Frieda) are certain to cheer you up.


First Line: THE phone next to our bed rang loudly.

*
The book might be available in libraries. I borrowd it from a library too. [F.M.E. 44]

Submitted for the Color-Coded Challenge 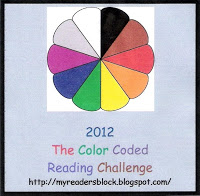 Also submitted for the following challenges: Find the Cover, New Authors, and Support Your Local Library.