Skip to content
neeruahcop Uncategorized April 6, 2012 3 Minutes
James Edward Pirkey Jr. died on May 13, 1997. He was thirty-six years old, had never married and had no children. He had placed a gun to his head, and reached for the next level, the place where he hoped to meet the precious spirits already departed.


This is the story of his life, of the childhood that left him lonely and searching, seeking something to make him feel worthy and welcome in the world. Instead, he found something which led him to leave the world.

In 1997, I was working in a small town in the desert state of Rajasthan, when one day I woke up to screaming headlines about a mass-suicide in US. Thirty-Nine people had been found dead in a house. There was shock and awe that day in the staff-room. For most of us, separated as we were from our families, and waiting for a transfer somewhere back home, there was an element of horror associated with the entire incident. Later, details trickled in: The Dead were part of a cult that believed there was a UFO following in the wake of the Haley-Bopp comet entering the earth’s orbit at that time. The suicide was a means to exit their bodies so that their souls could be free to enter the spaceship which would take them to the higher level.

Such details, however, could not make the entire thing comprehensible. So when decades after the incident, I heard of a book called Closing the Gate which was about a former member of the cult who committed suicide five weeks after the mass suicide, I simply had to read it.

Closing the Gate is a work of catharsis. Written by Deb Simpson, it chronicles the life of her younger brother, Jimmy, who ended his life at the age of 36.  “It’s past time for me to go,” he wrote in his farewell letter. “The Precious Spirits have long since taken flight.” But the book is more than just a biography of a troubled youngster. It is also a look at the underbelly of an advanced, modern society where traditional support systems have been uprooted, the close-knit family has disappeared and been replaced by a dysfunctional (de)structure where neglect and abuse are the norm.

Jimmy, born in 1961, to a mother who was prone to mental illness and an irresponsible, shirker  father who could never be a provider,  never did receive the love and affection that children need in childhood. Hauled from one dump to another by Jim, his rolling-stone of a father, Jimmy hungered for cuddles and kisses. At the age of five, with his parents separated – one in jail, the other in a mental asylum, he was sent to live with an aunt whom he barely knew. Growing up, taking up odd jobs, he grew into a secretive, solitary man who wanted more than anything to belong.

Seems like everybody else can find something they like to do – some reason to get out of bed. Something that makes them smile, sing, yell, anything, want to go to school or work or get married, have kids. Do something. Anything  – besides this dark empty space inside my head.

What if this is all there ever is? What if there is nothing special for me? Nobody wants to be with a stupid uneducated man who still lives with his mother and sleeps all day. Hell, I wouldn’t want to be with me…..be better off dead than living like this.

He thought, he had found his true family, in a cult called Heaven’s Gate: “They told me that I should pray about my searching to find the answers I was looking for…. No one had ever told me simply to pray for answers and then listen to the response.”

So he joined the cult. And when they left, he thought he too must follow them. Sitting in his room with a gun in hand and contemplating, he hears a knock on the door…

Opening Lines: On March 26, 1997, in Rancho Santa Fe, California, thirty-nine men and women were found dead in a spacious rented mansion, the apparent victims of self-induced drugs and alcohol. The twenty-one women and eighteen men, ranging in age from twenty-six to seventy-two years, were members of Heaven’s Gate, and carried out the largest mass suicide to ever occur on American soil.

*
Having had a release in March, the book is easily available in shops and on the Net. I received an ARC from the author.

Submitted for the A-Z (Titles) Challenge: 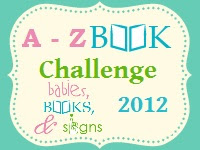