Skip to content
neeruahcop Uncategorized April 2, 2012 1 Minute
But Quiet to quick bosom is a Hell
And there hath been thy bane; there is a fire
And motion of the soul which will not dwell
In its own narrow being, but aspire
Beyond the fitting medium of desire…

These lines were written by George Gordon Byron, one of the greatest poets ever.

His poetry ranges from the Romantic:

She walks in beauty, like the night
Of cloudless climes and starry skies;
And all that’s best of dark and bright
Meet in her aspect and her eyes…

My days are in the yellow leaf;
The flowers and fruits of love are gone;
The worm, the canker and the grief,
Are mine alone…

– to the absolutely hilarious:

Saint Peter sat by the celestial gate:
His keys were rusty, and the lock was dull,
So little trouble had been given of late;
Not that the place by any means was full,
But since the Gallic era “eighty-eight”
The Devils had ta’en a longer, stronger pull...

Born in 1788 , he was only 36 when he died fighting for the independence of Greece, a cause he whole-heartedly believed in. The Greeks still revere him as a national hero. 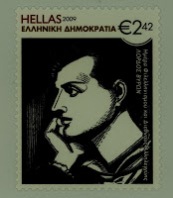 But I have lived, and have not lived in vain:
My mind may lose its force, my blood its fire,
And my frame perish even in conquering pain;
But there is that within me which shall tire
Torture and Time and breathe when I shall expire;
Something unearthly which they deem not of
Like the remember’d tone of a mute lyre…

The remembered tone of a mute lyre…. Can anything be more hauntingly beautiful?

Entry for letter B

8 thoughts on “B is for Byron”